The Duke and Duchess of Cambridge have joined a host of sporting stars for Pakistan’s national game of cricket, as they gamely try their hands as amateur batsmen.

The Duke of Cambridge took to the crease at Pakistan’s national cricket academy and impressed his hosts by hitting a six.

The notoriously competitive Royal couple both joined in a match with budding players during a full day in city of Lahore, visiting the National Cricket Academy.

While the Duke scored big, the Duchess was caught out twice.

The couple joined children participating in the British Council’s Dosti programme for a match of Pakistan’s national game.

The cricket match is part of the Duke and Duchess’s programme for their fourth day in Pakistan, which saw them travel on the RAF Voyager to the capital of Punjab.

After both taking a turn at the wicket, the couple high-fived the young boys and girls they were playing with on the pitch.

Despite his cricketing abilities, the duke admitted he had not played since school while the duchess conceded that, while she is a cricket fan, she particularly likes tennis and swimming. 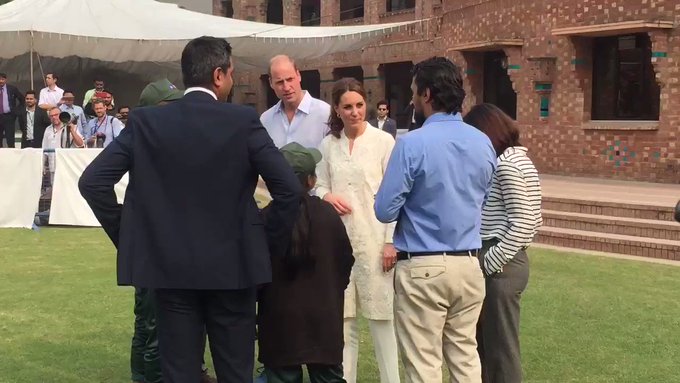 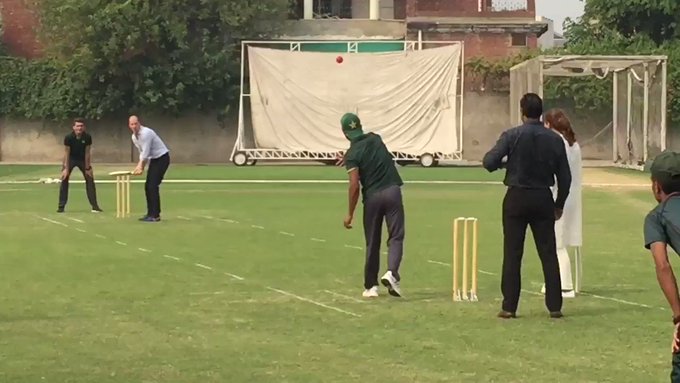 The Duchess wore a white shalwar kameez – a traditional outfit of a long tunic and trousers – by Gul Ahmed, while Will wore a light blue shirt and dark trousers.

Earlier in the day, the couple attended a birthday party at the SOS Children’s Village, a charitable organisation in the heart of the city established in 1977.

After games, music and traditional Pakistani cakes, the Duchess made a speech about the importance of family and motherhood.

Saying she had been “really moved and touched” by how those at the charity helped children to overcome the “extremely difficult” times they had endured, she praised their “happy home” and the “vital role of motherhood”.

“Being here in Pakistan this week, William and I have seen on several occasions how family is at the heart of your culture,” she said.

“You have shown us too that it is not simply a term that describes the relationship between blood relatives.

“Instead it describes those special bonds we share with those who make us feel safe and supported. It is the quality of those relationships that matters.

“Earlier this year I talked about the fact that it takes a village to raise a child.

“The village we have seen here today is the best representation of that ideal that I could have possibly imagined.

“Together as a village you are transforming children’s lives and providing them with strong foundations to support all their families. 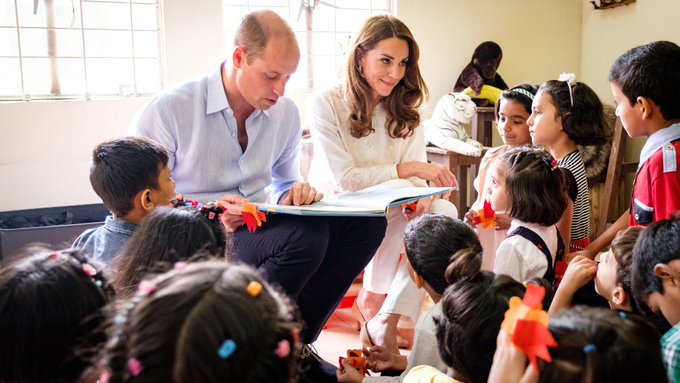 “You have created a home, where children are given the love, protection, and support that will enable them to have a fairer chance in life.

“Here, women who were once vulnerable, now play the most vital of roles as mothers and it is most heartening to see that you are not doing this alone.”

The couple sat in on a musical story telling session and were given brightly-coloured finger puppets to play along with.

“It’s very nice to be here,” said the Duke. “My name is William…. I am called William. How old you you?”

After asking each of the children’s ages, he asked one little boy: “How old do you  think I am?”

“Twenty one,” offered the child.

“I’ll take twenty one, that’s good!” he laughed. “I am a little bit older than that.

“I have my own children. A little boy called Louis and then there is Charlotte and them George, who is six. He’s almost as old as you.”

The couple then went into a private meeting with seven children who live in one of the boarding houses and their ‘house mother’.

Afterwards they were invited to celebrate three of the children’s birthdays – Iman, 12, Ibrahim, six, and eight-year-old Daniyal by singing a rousing rendition of Happy Birthday and helping them to cut a cake .

Later today, the Cambridges are due to visit the Badshahi mosque, Shaukat Khanum Memorial Cancer Hospital and Research Centre and the National Cricket Academy while in the city.

The couple will then be taken on a tour of the Badshahi Mosque, the most historic Islamic site in Lahore, set in the heart of the Walled City.

The duke will be following in the footsteps of both of his parents with the visit. His mother Diana, Princess of Wales visited the site in 1991, and it was also included in the 2006 royal tour of Prince of Wales and Duchess of Cornwall.

Wrapping up their forth and penultimate day, the couple will then travel to the Shaukat Khanum Memorial Cancer Hospital and Research Centre.

The cancer facility is another location previously visited by the late Diana, as a guest of her friend Mr Khan.

The royal couple will visit the children’s ward to spend time with patients undergoing treatment at the hospital, and are anticipated to speak to a number of their families.

Their third day of engagements on Wednesday saw the couple focus on climate change.

After an excursion to a melting glacier in the Hindu Kush mountain rash in northern Pakistan, the couple were given colourful welcome to a settlement of the Kalash people.

They watched a traditional dance and were presented with vibrantly coloured hats and scarves, with the duchess’s colourful beaded head wear featuring a large fuschia feather.