Meghan Markle got a pair of designer jeans and some dungarees for Archie today as she visited a Johannesburg art studio without her son or Prince Harry.

The Duchess of Sussex was spotted deep in conversation with artists, while she toured the Victoria Yards in Johannesburg, a regeneration project that is home to design studios, art galleries and a popular monthly food market.

It is understood that Meghan, wearing a navy midi-length Wilfred By Aritzia shirt dress and red slingback flats by Everlane, left son Archie in the care of his nanny so she could sample some of the city’s creative vibes.

Meghan appeared to be bowled over when she collected the pair of designer jeans commissioned from one of South Africa’s up-and-coming brands.

She could only say ‘oh my, oh my’ when she was saw the skinny fit jeans – and when a tiny pair of dungarees, made for her son Archie, were handed over she exclaimed ‘very cute’.

Lesedi Masemola, manager of Tshepo’s showroom, that features the company’s workshops and studios, said: ‘From what we’ve seen on the internet she’s the type of person who loves skinny fit so that’s what we made.

‘When she saw the jeans the words she said were ‘oh my, oh my’ she was very impressed she loved the jeans she said she couldn’t wait to try them on and said ‘wow’.

‘And when she saw the dungarees she said ‘very cute’, I think they are very, very lovely.’

Meghan’s designer jeans cost 2,100 South African Rand (£113) but for the Archie’s dungarees Mr Masemola said: ‘that was a special order we’ve never done before so I couldn’t give you a price’.

The mother-of-one was later mobbed by awestruck children who she gleefully hugged, while a boy dressed in red just behind her showed his shock at seeing a member of the Royal Family.

Meghan, who looked animated and smiled throughout the trip, then chatted to the youngsters and had a look at some of the budding artists own drawings.

Meghan was also wearing a distinctive pair of studded black earrings she had picked up in Cape Town from a local ‘ethical’ designer, Pichulik, for just £46.

The brand takes its inspiration from ‘ancient traditions, myth and an experimental use of materials’ and ‘celebrates empowering feminine narratives’ – perfect for the feminist duchess.

The duchess’s official Instagram account said: ‘While in Johannesburg today, The Duchess of Sussex visited Victoria Yards, which celebrates the power of community, bringing local artisans and ‘makers’ together to rebuild, support and learn from each other on a holistic level.

‘It was an exceptional afternoon where The Duchess had the chance to connect with the children and founders of the phenomenal programme for kids’ development Timbuktu in The Valley.

RELATED ARTICLE:  So this is apparently Kate Middleton and her children’s favourite London spot

‘She was also struck by the local denim designer who founded eponymous brand Tshepo who shared this info about the logo for his line: ‘The crown on my jeans represents the three ladies who raised me. Enjoy wearing this crown.’ Such a beautiful and touching sentiment!

‘Artists, artisans, sculptors, metal workers and carpenters are all part of the fabric of Victoria Yards, but it also utilizes the power of The DICE programme which supports several other local organisations in their work with marginalised youth and women.

‘These include: 94 Colours (run by The Duchess’ guides for the day, Hector and Sibusiso), CDP (a development programme for young unemployed and marginalised women that provides training to start creative enterprises), Enke (rebuilds the confidence and self-belief of unemployed youth through training and practical experience), 26’10 South (an architecture firm designing a local youth centre) and ReimagiNation (works with local secondary school students to create a social and creative enterprising mindset).’

Meanwhile The Duke of Sussex shared an image of Baobab trees he took during a visit to Liwonde National Park, Malawi on the eighth day of the royal tour of Africa.

One picture shared to the National Geographic’s Instagram account showed Harry lying on the floor holding the camera, and the other the picture he captured of the trees above.

The prince is today managing the magazine’s social media platform to launch a campaign called ‘Looking Up’, and will invite users to share their own pictures of trees from around the world.

He wrote: ‘Hi everyone! I’m so happy to have the opportunity to continue working with National Geographic and to guest-edit this Instagram account; it’s one of my personal favourites.

‘As part of this takeover, I am inviting you to be a part of our ‘Looking Up’ social campaign. To help launch the campaign, here is a photograph I took today here in Liwonde of Baobab trees.’

The campaign launch comes It comes as the prince insisted that protecting nature is ‘fundamental to our survival’ and should not be dismissed as ‘hippy.’

Harry is currently on the eighth day of his official tour in Africa.

Buckingham Palace said that Harry’s passion for trees and forests is ‘inspired by the work he does on behalf of his grandmother, Her Majesty Queen Elizabeth II.’

The ‘Queens Commonwealth Canopy’ was launched in 2015, when Commonwealth countries were invited to submit forests and national parks or plant trees to preserve in The Queen’s name.

The Duke of Sussex will manage the magazine’s social media platform to launch a campaign called ‘Looking Up’ Pictured: Harry during a tree planting at the Chobe Tree Reserve, Botswana, last Thursday 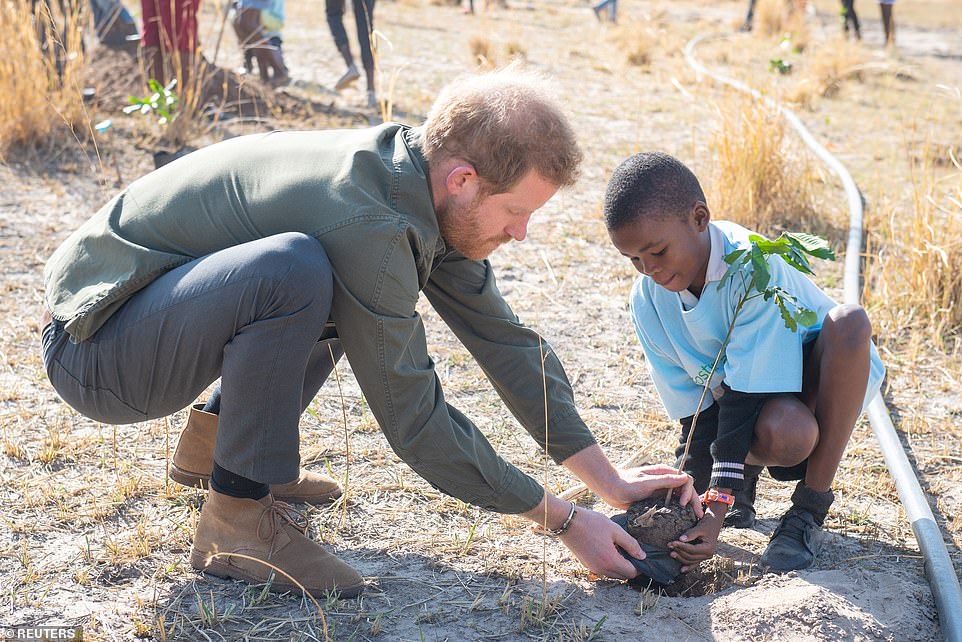 Prince Harry helps a local schoolboy to plant a tree at the Chobe National Park, on day four of the royal tour of Africa last thursday

Almost 50 countries are taking part and have already dedicated indigenous forest for conservation, or have committed to planting millions of new trees to help combat climate change.

The Duke has launched 15 of the QCC projects across the world including in the Caribbean, UK, New Zealand, Australia and Tonga.

During Their Royal Highness’s tour of Africa, there will be two more national parks committed to the project, as well as a tree planting initiative with schoolchildren in Botswana.

Harry is currently on the eighth day of his ten day official tour in Africa.

Today the Duke of Sussex said conservation is ‘fundamental to our survival’ and should not be dismissed as ‘hippy’.

Writing in the Daily Telegraph on Monday, Harry said that to make progress humans needed to overcome ‘greed, apathy and selfishness’ and that it was essential to learn from past mistakes to protect the world’s most valuable assets.

The Duke also warned of ‘vast ecosystems’ set ablaze in Africa, communities destroyed for short-term gain, and said that a ‘natural order’ between humans and wildlife must be restored.

He added: ‘This may well sound hippy to some.

‘But we cannot afford to have a ‘them or us’ mentality. Humans and animals and their habitats fundamentally need to co-exist or within the next 10 years our problems across the globe will become even more unmanageable.

‘Nature teaches us the importance of a circular system, one where nothing goes to waste and everything has a role to play.

‘If we interfere with it, rather than work with it, the system will break down.

‘Conservation used to be a specialist area, driven by science.

‘But now it is fundamental to our survival and we must overcome greed, apathy and selfishness if we are to make real progress.’

The column comes ahead of his visit to Malawi’s Liwonde National Park on the eighth day of a tour of southern Africa to highlight conservation and anti-poaching work.

The duke, who is on a 10-day tour of Africa, yesterday said a major collaborative approach ‘across agencies, borders and continents’ is needed to end the poaching of Africa’s iconic animals such as rhinos and elephants.

At a reception at the official residence of Britain’s High Commissioner to Malawi Holly Tett, the duke said on Sunday: ‘It is only by working together across agencies, borders and continents that we can finally put an end to the illegal wildlife trade crime that continues to deprive local communities of some of their most valuable natural resources.’

He went on to say, at the event in the capital Lilongwe, that poaching ‘hampers development and undermines the rule of law’ and praised the nation’s ability to track down the poachers.

The duke said: ‘Guardsman Mathew Talbot was unfortunately killed a few months ago in the line of duty but the relationship between the British military and the Malawian rangers remains strong.’

Earlier on Sunday the Duchess of Sussex surprised a classroom of female charity workers with a Skype call during Prince Harry’s solo visit to Malawi.

Appearing on a television screen in the library of the Nalikule College of Education in Lilongwe, Meghan Markle, 38, waved hello from Johannesburg as the group of young women burst into song for her.

Prince Harry introduced his wife before the surprise appearance, as she joked about their four-month-old son, who has joined them on their 10-day tour of Africa, saying: ‘Archie’s taking a nap.’

The Duke of Sussex was given a warm and energetic reception at the college on his visit to learn how girls have been kept in school by Campaign for Female Education.

Meghan Markle and Prince Harry have shared a behind-the-scenes video of a smiley Archie giving Archbishop Desmond Tutu a high five during their ten-day tour of Africa.

Alongside a montage of clips shared to their Sussex Royal Instagram account, the caption reads: ‘Thanks Cape Town for another impactful and memorable day A few more highlights of this very special visit with Archbishop Desmond Tutu.’

The adorable footage shows Archie, four months, enjoying his first official engagement – as his mother Meghan, 38, can be seen lifting him in the air as he meets the Archbishop.

And royal fans across the globe took to the comments to share their appreciation for the video – which played out to the uplifting hymn, ‘Oh happy days.’