“My time machine took me to 2027 and Prince Harry has had a sex change,” was the headline on a Sunday Sport “exclusive” yesterday.

Somewhat predictably, the man making this prediction was a 43-year-old divorcee called Dennis.

The “amateur scientist” built a time machine with components he bought off eBay and instructions from Junior Electrician magazine – which doesn’t appear to actually exist. Perhaps it’s from the future?

Dennis also reports that, in this future – eight whole years ahead – “head transplants” are commonplace and “everyone goes about naked on account of global warming and that”.

The nakedness, Dennis reports, contributes to “everyone” having sex with each other in the street, “because they’ve got cures for the AIDs and the clap and everything”. Which is impressive, but perhaps less impressive than scientists working out how to do full-on head transplants in the next eight years.

Dennis is divorced — and no explanation is required beyond this piece.

The Sunday Sport: “Hold my pint.” 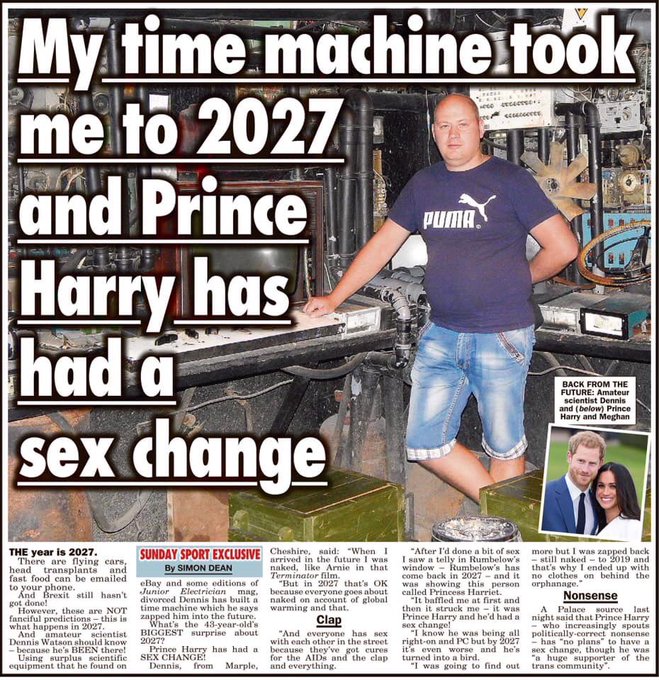 And, possibly most believably of all, Prince Harry is now Princess Harriet. “I know he was being all right-on and PC but by 2027 it’s even worse and he’s turned into a bird,” Dennis said.

I doubt a royal would have their SRS on the NHS

“A royal would be able to pay for private healthcare tho, that’d speed things up,” replied a person called Seb.

Waiting times for a first appointment at a GIC are around roughly three years, with months or years-long gaps between the subsequent multiple appointments that are necessary for a trans person to receive gender-affirming care.
Loading...

FacebookPinterest
RELATED ARTICLE:  The Duchess of Cambridge has inherited something very special from the Queen